Rootkits effect on OS kernel. These changes can hide the main action of files, processes, Windows internal services, etc. Also, malware may update its files without noticing the user about connecting to its remote server. Changing the system MBR and create destructive drives or changing the actions of unchanged drives are some of the important actions of Rootkits.

Darkgalaxy malware is a type of Miner and is a sub-set of Rootkits and will add its destructive codes in the MBR section, so the codes execute before boot and OS start. Also, it downloads and executes a set of destructive files by creating two WMIObject.

Signs of infection in the “attacking to SQL servers” method

Describing the actions of the main file of the malware

After the survey of the contents of created WMIObject by the malware, we showed the execution and distribution procedure. First, malware will download its main files by connecting to specific domains.

These domains change from time to time.

Responsible for changing the MBR of the victim’s system disk

It downloads a file xpdown.dat. The contents are the addresses of bitcoin files.

It changes the DNS into two values of 233.5.5.5 for the preferred DNS server and 8.8.8.8 for the alternate DNS server. Then, malware will download the following list that each one is responsible to reach each one of the goals of the malware.

Name and the path of creating destructive files

After downloading the above files, the malware acts based on its wmi code and stops other processes of Miner malware such as noutrino, bitminer, and etc. So it can easily perform its destructive actions. So, it deletes file processes such as services.exe, WUDFHosts.exe, csrss.exe, wininit.exe, svchost.exe, and taskhost.exe that are in a path other than their original path.

Also, it removes all signs of infection for updating. This malware will also stop any desk services. It should delete all paths and files in the %Windir%\debug\lsmosee.exe and %Windir%\help\lsmosee.exe paths so it can replace the newer version because the malware creates its miner file as lsmosee.exe in the victim system. Also, it removes these jobs: WindowsUpdate1، WindowsUpdate3، Windows Update، Update، Update2، Update3، Windowsinit، System Security Check AdobeFlashPlayer.

To prevent infection to other malware and distracts the mining process, the malware closes all access ports such as 445 and 139, then defines a new policy “Win” for the ipsec. Hence, only those who the malware desires can connect with the system.

These filters do not apply in XP OS. Then it disables SMBdeviceEnabled through the registry.

This file restores system data such as public IP, local IP, the process using rates, file paths and commandline of the executing processes, type and the version of the OS, HardDisk and domain storage space, username and password that obtained through executing mimikatz and to send it to the malware server.

Also, the malware runs the EternalBlue vulnerability on the other clients and creates a Backdoor on them to distribute itself using the scrss.exe file.

After attacking, this malware use brute force to attain the password and username of the victim. Then, after attaining the correct password and connects to the SQL server will create its jobs and procedures. 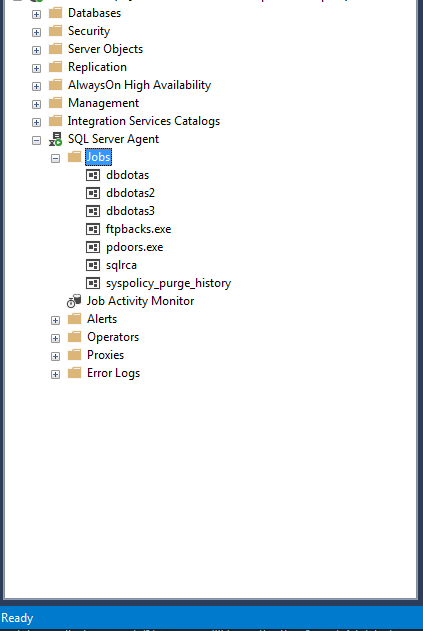 In the following, you can see some of these jobs:

Then you can see a part of the above-decoded job:

In other examples of the malware, May some other jobs with similar names existed. These jobs download and restore other malware files and execute them immediately. This malware restores the destructive files of the malware in the following path:

Then, the malware creates and executes a fake file “Winlogon.exe” in C:\360safe\ and starts to attack SQL servers. At the beginning of the attack, this malware activates CmdShell with the “EXEC sp_configure 'xp_cmdshell',1” command after attaining the password so it can execute its desired codes and remotely creates jobs. The malware will download its destructive file after being connected to its FTP server with different domains. An example of an FTP Server domain that the malware connects to:

Padvish Antivirus detects and disinfects this malware. To prevent infection to this probable malware using EternalBlue vulnerabilities, it is recommended to use represented Microsoft security patch “ms17-010”. Also, to receive more data about this vulnerability, refer to “How to deal with EternalBlue (CVE-2017-0146/ MS17-010) on the Amnpardaz knowledge base website. Padvish IPS can detect these vulnerabilities and prevent their entry into the system.